The situation with the accident in the city of Kirov in the current year is a concern management UGIBDD AMIA Russia's Kirov region. If in the districts for operational data, the number of those killed in road accidents decreased by 7.1% compared to the same period last year , the regional center for Road Traffic Victims was three times higher (an increase from 2 to 6 ) .

By members of the traffic police is taking all possible measures . Number dresses DPS providing traffic control in the city increased. During peak hours ( morning and evening ) on the road of the regional center displays additional strength from the number of " armchair " employees

Road inspection. From March 26 to patrol the streets of the city motonaryady DPS.

However, only the traffic police forces of the situation is not corrected. That is why the head of the regional traffic police Alexander Plotnikov appealed to civil society activists and invited to a meeting of representatives of social organizations and movements of Kirov . The aim - to discuss the unfolding situation , as well as to take joint decisions and implement a series of necessary measures , which would help stabilize the situation with the accident in the regional center .

At a meeting attended by the First Vice-President of the Kirov region of the Russian Section of the International Police Association Igor Sharipov , chairman of a voluntary national guard Sergei Kolevatykh , Chairman of Kirov Branch of interregional trade union " Taxi Driver " Maxim Belov .

Thanked those present for the assistance in the field of road safety , Alexander Plotnikov outlined the causes and circumstances of automobile accidents in the regional center . During the discussion, suggested Igor Sharipov used more actively students. Young people , primarily college students legal " International Police Association " are ready to create a special group that focuses on work on road safety , including patrolling the streets and roads, prevention work among road users , the organization of promotional activities .

Just decided to discuss the interaction of students and traffic police at the next council meeting Suza and universities Kirov .

Sergei Kolevatykh drew attention to the problem of discipline pedestrians. PSD leader has proposed, as evening rush hours by voluntary national guard special raids on the busiest streets of the city near the unregulated pedestrian crossing . The main task of civil society activists - preventive work with pedestrians .

In general, the meeting was quite constructive. Having discussed the main points of interaction , it was decided to start the implementation of joint activities this week 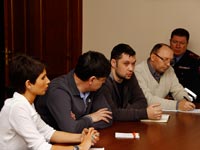 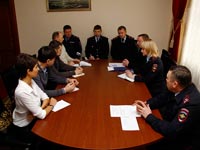