Delegation from Kirov go off on the round-the-world-trip, to gather a collection of national headdresses

“Hat master” project started on 5 April 2014 in Kirov. Businessmen from Vijatskije Polanyi set forth by their cars on a round-the-world-trip. Being the member of RS IPA’s Kirov Regional Branch, Oleg Uvarov with his friend go off on this trip in order to found Russia’s first ever museum of traditional headdresses in their native city. The President of tourist hotel resort “Metelitsa” Valerij Smoluk and the Chamber of Commerce and Industry’s Head in Vijatskije Polanyi region hope that this museum will make their hometown attractive for tourists.

Moreover, it is a good chance for them to develop friendly relations with their colleagues, IPA’s foreign members. Natural History museum’s ex-president Albert Khlyupin, will join also join the expedition as a journalist, photographer and translator.

The project’s basic philosophy is gathering exhibit items for the Traditional Headdresses Museum in Vijatskije Polanyi. There are no private museums of this kind in Russia, so we will gain experience for our future activity abroad. All the more, our business is just connected with headdresses as soon as we realize fur hats.

As for the financial matter, Oleg Uvarov explained that expedition was organized on private investments. Substantial aid was granted by the Chamber of Commerce and Industry, Kirov Region’s and Vijatskije Polanyi’s Administration.

Travelers take album with Kirov Region photos, in which people from different countries will write their notes and autographs, as well as the Vyatka national hats, in order to exchange them on other nationalities headwear.

It is supposed that journey will last for 120 days. The expedition starts to Finland, then to Europe, after this they are going to cross the ocean with an eye on visiting North America, then Australia, Malaysia, Asian countries, which includes a range of Chinese provinces.

According to Oleg Uvarov, they will fly from Europe to America by plane, their car on the board of the ferry. They change back to the car in New York.

We are very proud of our Association members and wish them successful journey! 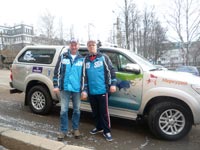 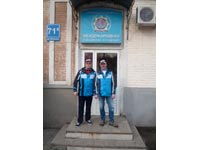 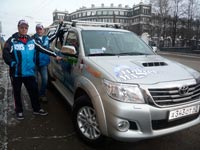 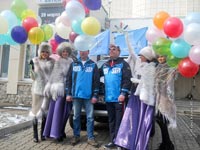