5 years ago an educational institution was opened which prepared employees for law-enforcement bodies – militiamen, firemen, tax specialists.
On July 27, the Judicial College of the International Police Association, Russian Section, has celebrated its first anniversary and at the same time said good-bye to its graduates for the second time.
Black colour is always fashionable, especially if it is decorated with white aglets. All girls-cadets of the Kirov branch of the IPA Judicial College are aware of it. Evgeniya Novoselova didn’t feel uncomfortable about the uniform. Her decision about the profession was purposeful. And now after 3 years of studies she’s going for her diploma with honours with the same confident gait. 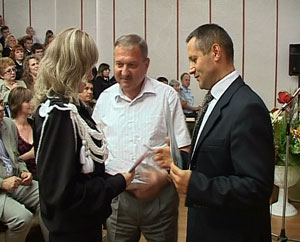 3 years ago she among the other 150 boys and girls, having passed all entrance tests, appeared in the dear building of the college. They remember not only studies but also interesting college life.
A column of young cadets takes part in the Victory Day Parade. Camps where they are not scared of living under the battle conditions with porridge and butter. Sport competitions, cultural events and even trips abroad. All this has passed as if in a moment. And tomorrow they will start a new life without school and teachers but with a big fund of knowledge and impressions they received here.
“It’s a little bit sad that we have to part but it’s not bad … I’m an optimist who always goes straight on. Every life point has something good …”
5 years ago there were many skeptics who didn’t believe in success of the college. Today it’s quite obvious that there are boys and girls who are ready to devote themselves to serving law. And there is a team able to work for the prospect.
IGOR SHARIPOV, DIRECTOR OF THE JUDICIAL COLLEGE OF THE INTERNATIONAL POLICE ASSOCIATION: “We are going to finish construction of a new building, create thematic clubs; we want our cadets to develop.”
And more good news for the 5th anniversary of the Judicial College was announced by a vice-president of the Russian section of the International Police Association - Nikolay Koshcheev.
NIKOLAY KOSHCHEEV, VICE-PRESIDENT OF THE RUSSIAN SECTION OF THE INTERNATIONAL POLICE ASSOCIATION: “The Academy of Law of the International Police Association will appear in Kirov, there it’ll be possible to continue the studies”

And many college leavers are going to enter the Academy to get the higher education. But they will think about it more seriously a little bit later. Now they are waiting for the final ball where young men will wear suits and ties, and girls – evening dresses. Now cadet uniform is a small accessory from their past life.