Bright and spectacular was celebrated Day of the Defender of the Fatherland at Theater Square. The event took place with the participation of the regional branch of the Kirov VPA IPA. Despite the freezing weather, the celebration was visited by many of the townspeople.

In the morning, residents of the city could see karting competitions. More than ten racing cars at high speed driving on the area in a fenced area. Enthusiastic eyes of adults and children watched this spectacle.

Inauguration started at 11:00 am congratulations on behalf of the city administration.

To present at the area officers of the Interior and the special units were presented demonstrations. Staff DPS SWAT and riot demonstrated elements of unarmed combat: fighting techniques, repel the attack when the enemy using a weapon or a stick. Riot policemen showed their power and strength: a rope moved a few meters heavy armored car weighing 7.5 tonnes. Special Forces soldiers using assault weapons now demonstrated reflection attack on the convoy, the admiration in the eyes of children standing in the square.

Kirov residents witnessed the capture of "dangerous criminals": the square were drawn from the exemplary performance of special forces.

The audience was shown special, used by members of the special units of the Interior and in his work: APC, armored "Tiger" KamAZ. Everyone could take a picture with appliances, hold in your hands a copy of the weapon. That prospect is especially attracted boys - the future defenders of the Fatherland.

In addition, the company "Motoravto" at Theater Square were presented cars. Those interested can sign up for a test drive.

Tent with barbecue, cakes and hot tea in the square in such a cold day was just what we needed. At 12 o'clock already lined up a field kitchen. Everyone could get a portion of hot buckwheat.

From the stage of the Theatre Square throughout the festive event sounded congratulations, sang songs to entertain everyone present. 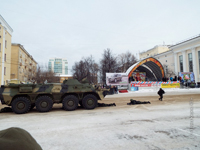 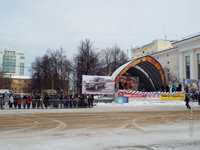