27 February 2016 the First International Festival of  Popular Bench showed as how one sporting event brings together  Russian children with their coevals from other countries. The initiator of the festival was the International Charitable Found of the great prince Svyatoslav with support from the Ministry of Sports of the Kirov region,  Children's and Youth Kirov Centre of the Oktyabrsky district and the Kirov regional department of  the IPA.

This arena is a  meeting place for friends rather than competitors.

Several lifting platforms  with disks and griffes were unifying factor.

That the lot is required for the national press, where lying athlete raises the bar in half his weight maximum number of times.

Among participants there were teams from the  districts of the Kirov region and other Russian cities. Special guest of the tournament was team from the Donetsk  Republic. This trip was the first pupil’s travel outside the region.

A group of young Hercules from Abkhazia also looked special. It was the first  serious sport competition for them, although they had a little experience in the power bench. Therefore, the team leader had to resort to the Caucasian motivation techniques for a good performance.

As a result they took second  place. In general, the medal program of the festival was various.  The winners were determined among the orphan homes and the best   by age groups, and of course personal records.

The first international Festival of Popular Bench had a great success!!! 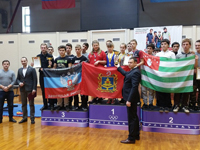 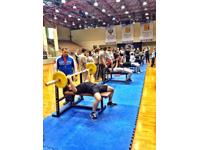 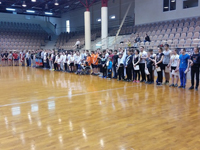