At 23th November our city was visited by guests from other regions of our country. Valentin Nikolaevich Mikhaylovsky, the president of «Police association» of Krasnodar, the chairman of the constant social commission of IPA and Nikolay Ivanovich Boyko, the chairman of the international human rights committee "Kontinental" of Stavropol took part in the All-Russia scientific and practical conference «Safety and survival rate of the population in the conditions of a transition period: problems and ways of their decision». After conference guests visited «Police association» with friendly visit.. After a dinner Valentin Nikolaevich and Nikolay Ivanovich visited solemn opening of a cadet class at school No. 48.. With wishes of excellent study, strong friendship and mutual understanding acted the president of «Police association» Kirov Nikolay Koshcheev.

Guests liked such saturated program and right after opening of a cadet class they went to college where the meeting with students took place. I.M.Sharipov, the director, organized excursion on college, told story of creation and development of this educational institution.

But on it "adventures" of our dear guests didn't end. At 22.00. in a building of traffic police instructing  «night patrol» took place. The commander of a regiment Alekseev D. S. in detail stated the joint scheme of work of staff of traffic police with persons from "patrol". Valentin Nikolaevich and Nikolay Ivanovich were interested in this initiative, they were pleasantly surprised that the conference hall in which passed instructing, was overflowed. Besides, at general meeting Nikolay Koshcheev awarded especially caused a stir persons for active participation in social movement against traffic violations of the rules. 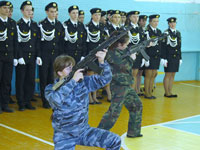 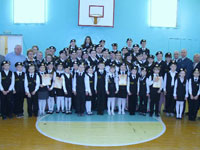 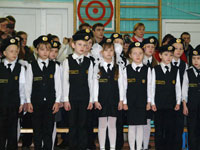 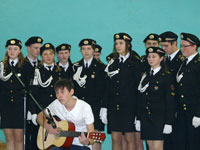 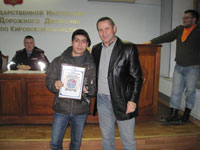