September 21, 2013 at the Theater Square in Kirov has gathered a huge amount of people, everybody was something to see. There are race motorcycles and rally «Taxi Peugeot»  and  multiathlon for the  Cup Mayor among Kirov driving school instructors and, of course, the most striking perfomances of employees RPS, battalion Patrol and  PDS and employees SPF IAM. The festival opened by the award of the votes management of Road Inspection in the most polite drivers Kirov. Of several  thousand participants of action was choosen 20 people. What unites them-complete absence of complains from the employees STSI. Kirov region RPA IPA was very pleasantly see among the awardees Paul Kosolapov’s - activist  «Night Patrol», who help fight with drunken drivers on city roads already all the year round.

Also, according to traffic police special battalion commander Dmitry Sergeyevich Alekseyev,  pleases, that with every year becomes larger the friendly and attentive drivers. Statistics of the action «Polite driver» shows, that women at the wheel of a car can be not less polite than men. Among the participants they were many.

After awarding was joint performance of crews battalion RPS, battalion Patrol and PDS and SPF IAM. The guys showed famous police U-turns, jewelery parking in reverse, spectacular driving armored car for special purpose «Tiger». This area on the theater have not seen!

The program of the festival includes  performances on fighting, arrest the offender, protection from armed attack.

The best inspectors battalion RPS demonstrated skill in the area of the traffic controller. Surprises, how skillfully and harmoniously police possess striped rod.

At the end of the festival made a police parade vehicles, consisting armed RPS, Patrol and PDS and  SPF. As it turned out vehicle fleet guardians of order noticeably updated. Vehicle fleet includes domestic and foreign cars. 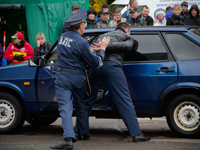 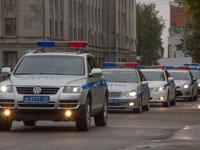