April 12, 2017 the delegation of the Police Academy in the Federal State of North Rhine-Westphalia visitedthe Kirov Branch of the Moscow State Law Academy (MSLA). The visit was held within the framework of the friendly relations between the members of the Kirov Branch of IPA, headed by Nikolay Koshcheev, and their colleagues from the Police Academy. The one trains personnel of law enforcement officers for the largest Federal State of Germany — North Rhine-Westphalia.

Director of the Kirov Branch of the MSLA Nikolay Shaklein warmly received foreign guests and told them about this educational institution’s uniqueness for our region and the whole country.

Officers of the Academy Konrad Breuker, Wolfgang Shuhomsky, Hans-Peter Reinbold met with students and teachers of the Institute. They found out many interesting facts about the Institute, its system of training qualified personnel. The German guests were pleasantly surprised when they saw the stand, dedicated to the educational process in their native Police Academy. “This material tells about the positive experience that is used in the training of police officers in Germany”, — explained Associate Professor of the State and Legal Disciplines in the Kirov Branch of the MSLA Vladimir Kislukhin.

At the end of the meeting, foreign guests expressed gratitude to the hosts for the warm reception and invited teachers and students to visit their Academy on a return visit. 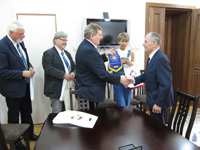 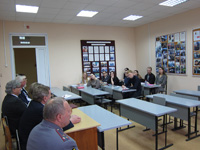 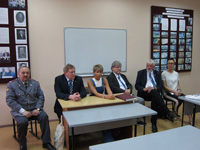 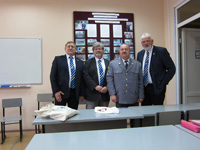 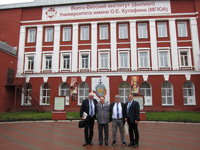