Acquaintance with with a future Olympic medal

7 December, 2016 in Belaya Kholunitsa of the Kirov region in the boarding school for visually impaired children and children with limited health passed a sports holiday of the Russian press, with the active support of "Police Association".

Among the 118 students in the boarding school there is a group of boys and girls engaged in sports activities. They on a regular basis visit available health section in cross-country skiing and athletics. Boys and girls participate in all-Russian competitions among the visually impaired. In the future, Teens can reveal himself in another sport – in the Russian press, which in our area is associated with the name of Vladimir Reshetnikov.

At correction schools Russian press is gaining a wide girth. Belokholunitskaya only had to meet with this. But it was enough get to know children that they will have to raise the barbell  as there was full house of participants. From first graders to graduates. They were attracted to the format of the intra-school Championship, where everyone could expect to win. The rules are simple - we have to make fixed weight barbell on the maximum number of times. Athletic performance is not the only one that attracts the younger generation to press machine.

Tournament in Belaya Kholunitsa will serve as a starting point in the selection of a strong and promising children in the region. But the focus will be on children from boarding schools. For which the title of Paralympic champion from now on cease to be a distant dream. 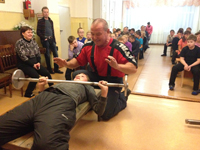 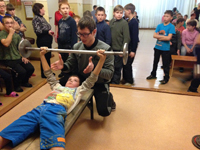 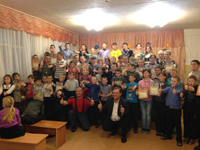 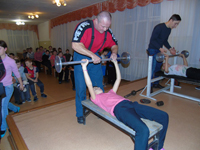 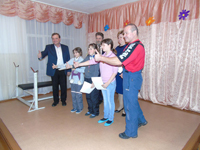