Sport plays a great part in the younger generation upbringing

Sport  plays a great part in the younger generation upbringing.  Sociological surveys of young people, playing sports, show that sport forms the first idea of life, society, the world in whole. It is sport that displays such important for contemporary society values as a fare shake equality, obtaining success, ambition of being the first, beating not just a rival, but themselves.

So sport is a strong social phenomenon and the means of a successful  socialization.

All the participants were divided according their weight-and-age category: junior age (to 11 years old), senior (from 11 to 15 years old). The weight of a barbell  for the girls of junior age was 20 kilos, the girls of senior age – 30 kilos and correspondingly the boys of junior age lifted the barbell of 30 kilos and young men – the barbell of 40 kilos. A participant could make just one attempt. The criteria that scored an attempt were the breast touching of barbell, full hands extension, breaking off outlet from bench. According to the results of the competition Michail Movsecyan became Bench Press King and Dians Vorozshtsova – Bench Press Queen.

The competitions provoked a great interest and excitement  among children. Every prizewinner got a medal and diploma from Kirov region organization Dinamo, and the Russian Bench Press King and the Queen were awaeded with cups. 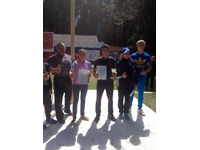 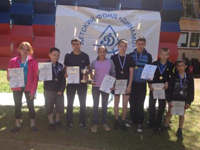