Главная>News
News
German colleagues Frank Hellmuth and Iris Kubler visited the Kirov branch of RS IPA on December 13, 2010. Iris Kubler and Frank Hellmuth have been working in police for many years. They are still active officers responsible for the selection of liaison officers working in German embassies worldwide. They are both the members of International Police Association German Section. They freely speak several foreign languages and Frank speaks Russian very well.

The experts come regularly to our city. Nicholay Koshcheev met Frank in 1999 in Wiesbaden, where he trained on probation in criminal police. During these ten years the colleagues gladly solve service problems together and visit each other. Today Hellmuth came to Vyatka with his colleague, Iris, who, having traveled all over the world, was for the first time in Russia.

On December 15 they visited Law College of Russian section IPA. The students of the college learned firsthand about the everyday life of German guards. Secrets of the job were told by two representatives of the criminal police, who arrived to Kirov from Berlin. There is a long experience exchange which is now of immediate interest between the college and German collegues. Next year, law enforcement agencies of both countries will be united with the one name - police.

Frank Hellmuth, the chief commissioner of criminal police: “This is good: the structure will be changed and problems will be solved more quickly.”

Every visit of Germany guests is as a master class for the students. Therefore, such meetings are usually held in a question-answer form. The guys ask with a keen interest how the police in the West fight with criminals and investigate tangly affairs. The study of foreign practice is sometimes delayed for a long time.

There was also a touching moment at the meeting. Three wives of the policemen killed on duty received the material help. A similar practice exists in Germany, where policemen do not forget their dead colleagues.

Iris Kubler, the chief commissioner of criminal police: “We have social police associations which help the killed officers’ families. They regularly render material help and psychological support which is also very important to the relatives.” 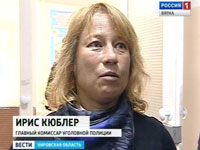 The experience exchange will be continued next summer. The students of the college will go to Dusseldorf to the one of the biggest in Europe Police Academy. Some groups have visited it already. According to the teachers’ commets the student having returned from there start to treat there future professions with a special different concern.

The foreign friends were for five days in Vyatka. In addition to the official meetings and press conferences, Frank and Iris had rest “in Russian manner”, with visiting russian banya, driving snowcars. In Kirov they visited the office of Kirov Regional IPA, the main sights.The guests enjoyed our hospitality, especially the culture at table, they were surprised by plenty of chin-chins.

Next year we are also planning to receive guests from different countries and take part in friendship weeks of foreign sections IPA.