The 35th international conference of the International Police Association took place in from 16 till 20 September. For almost its 60-year history of the organization, became the host of the forum of policemen from the whole world for the first time. The single delegate from was the president of the regional section IPA Nikolay Kosheev. He represented the country and spoke on behalf of his Russian colleagues. 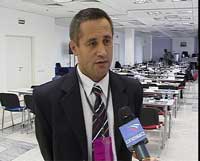 N.K. Of course it’s very honorable. I feel great responsibility before my colleagues, IPA members. I’m obliged right to them for that high authority, which has in the Russian Section. The main aim of the conference is to pull together members of the organization, to put into practice our motto “Servo per Amikeсo” more actively. This principle greatly helps to solve common tasks of fight against the crime in the whole world.

Corr. The conference went on in a closed regime. You are the only representative from , who has complete information about what happened there and what the delegates told about.

N.K. In the beginning leaders of commissions made reports and common organizational questions were solved. Further the participants were divided into 8 sections according to the spoken language. I got into the group which consisted of colleagues from , , , and . In our section an active discussion of the problem of juvenile criminality and juvenile mortality from criminals took place. The participants of the section were greatly interested in experience of , which I shared on the basis of work in organs of inner affairs. According to the results of the work a special brochure with summarized materials will be published. It can become a desk manual for serving officers of law enforcement bodies.

In general some delegates prepared speeches on problems, which are the most important in their countries. And at the same time it was understood that all they were typical of most of the countries – IPA participants. For example, policemen from were extremely concerned about provision of safety of children. Lately they become victims of terrorist acts very often. Didn’t this happen in ? More than 180 children perished as a result of attack of militants on a Beslan school 4 years ago!

Corr. What was your speech devoted to? What problems concern Russian policemen? 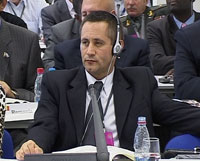 N.K. On behalf of the National Executive Committee of Russian Section IPA I offered a proposal about conducting a charity action “World Book and Relay Race of Remembrance”. Today terrorism became a serious threat to safety in the whole world. Acts of terrorism stagger , the , , , , . People of goodwill unite in their fight against terrorism and criminality, and here officers of law enforcement bodies show heroism and self-sacrifice. We shouldn’t forget our colleagues, who perished protecting peace of citizens. The aim of the action is to perpetuate memory of police (militia) officers of the countries-members of IPA, who perished during performance of their duties in fight against criminality and terrorism; to create world annals of exploit of the 21 century.

Russian section of IPA is ready to take upon itself basic organizational work on preparation and conducting of this action.

The participants of the conference endorsed the idea unanimously.

Corr. What do you think, why politicians, taught questions of diplomacy, cannot agree but policemen find common ground so easily?

N.K. Policemen of the whole world have only one enemy – a criminal. They take care of one business. Service per friendship helps to accomplish it far more efficient. Borders are washed out thanks to such communication of policemen. It’s far easier for us to solve problems and working questions when we know each other, when we know our colleagues personally. And experience of different countries is invaluable experience, and we share and adopt it with pleasure.

Such a great number of people who came to the conference to talks about various things. First of all, about the authority of the Russian section, my colleagues in force structures. And it’s a great piece of luck that there is such an organization, where people, speaking different languages, understand each other easily.

IPA is the only professional organization of policemen irrespectively of work status, place of service, language, race, religion, ideological views. And these are people who are concerned most of all about safety of people in the whole world.